But what was going on in 1853 that might have motivated the 1st International Statistical Congress to pass a resolution requesting the preparation of a uniform classification of the causes of death? That was the year that the third cholera pandemic was breaking out, starting in Russia and spreading to Indonesia, China, Japan, the Philippines, Spain, England and the United States. At that time, the predominant theory about the spread of disease was that it was caused by “bad air.”

Physicians in London had already started to seek a more formalized approach to the spread of diseases, following an earlier cholera outbreak in 1831. They formed the Epidemiological Society of London in 1850, “to institute rigid examination into the causes and conditions which influence the origin, propagation, mitigation and prevention of epidemic diseases.”

A major cholera outbreak struck the Soho neighborhood of London in the summer of 1854, resulting in the death of over 500 people, all within 250 yards of the intersection of Cambridge Street and Broad Street. This caught the attention of London physician John Snow, one of the founding members of the Epidemiological Society. He was not a fan of the “bad air” theory, and used a dot map to show the cluster of cases around the public water pump on Broad Street: 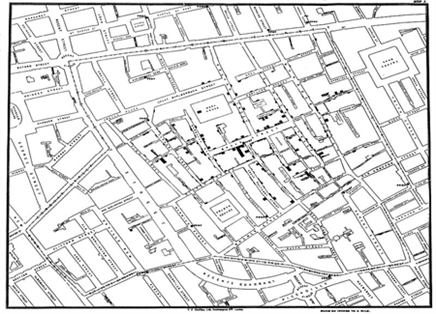 The official story is that his evidence convinced the local council to disable the well pump by removing its handle. A more colorful version of the tale has John Snow secretly removing the pump handle at night, after the local council delayed taking action. That version is reportedly part of the inspiration behind the final lines of Bob Dylan’s “Subterranean Homesick Blues”:

‘Cause the vandals took the handles

John Snow was clearly a man ahead of his times. The “Germ Theory” of disease did not yet exist. It wasn’t until 1885 that Robert Koch identified the V. cholerae bacillus as the cause of the disease. In fact, the field of epidemiology did not even exist yet, despite the title of the London medical society.

Tracking the cholera pandemics created a world-wide interest in disease patterns and spread, and helped to create the need for a way to classify disease. We’ll never know for sure if that was the driving inspiration behind the first international disease classification. But that’s my story, and I’m sticking to it.

We'd Love To Tell You More

If you’d like more information, want to schedule a one-on-one demonstration, or just want to let us know what you think, please fill out the form below and we’ll contact you as soon as possible.

Thank you for your inquiry.

We've received your information and will be in touch shortly.